BC Government Not Prepared for Tsunami on Northern VanIsle

A tsunami could devastate VanIsle communities unless action is taken to plan and prepare.

A mega-thrust earthquake poses the biggest threat. This category of quake happens when one of the earth’s tectonic plates is thrust under another. Over time enormous tension develops, and eventually, when it releases, things start shaking. When a quake happens in the wrong place, tsunamis occur.

The study projected the extent of damage that a huge wave could cause if one hit the Kyuquot Sound and Nuchatlitz area, including Kyuquot, Zeballos, and Tahsis.

There was good news and bad news.

One of the project leads, Philippe St-Germain, told Check News that the new mapping revealed much of Tahsis would be flooded. Still, it also concluded that Tahsis residents would have more warning time than previously expected.

Shaun Koopman, Protective Services Coordinator for the SRD, says the study shows that island communities from Muchalaht Inlet, near Gold River, to Cape Scott are vulnerable.

Unger says the SRD’s next steps will host in-person public meetings in the Kyuquot and Nuchatlitz region later this month. The SRD hopes “to discuss and educate the public” about the impact their tsunamis models could have on future planning, including land use planning, and evacuation options.

The modelling shows that a local tsunami – a wave generated by an earthquake within 1,000 km – could reach the coast within 15 to 20 minutes.

Predicting when the Big One will happen is impossible. That means residents and communities need always to be prepared. Strong shaking, followed by a receding ocean, and a loud roar, might be the only warnings they get.

The new modelling also reveals how unprepared the BC government is for a big tsunami. Currently, there are large areas with no credible plan for how to respond.

Some areas on Vancouver Island, including Victoria and Tofino, have had tsunami modelling done, but the BC government hasn’t prioritized less populated places like Tahsis, Gold River and Zeballos. That seems strange since these communities would likely see a wave first if a quake happened in Alaska or the fault near the island.

“Unprepared” seems to be a pattern for Horgan’s government, especially in rural areas. They weren’t prepared for the heat dome, the fire in Lytton, the ongoing opioid crisis or the long waits for ambulances and 911 calls.

And it’s not as if tsunamis hitting VanIsle is unforeseeable.

Experts say it’s not a matter of “if” but rather “when” the next one will strike.

Major tsunamis have hit not too long ago. The last one was in 1964 when a series of waves struck Port Alberni.

Since Horgan’s government hasn’t stepped up, a private donor took action to help the SRD pay for phase two of the project.

Phase two begins next spring. It involves designing, purchasing and installing outdoor tsunami signs with maps to inform people what to do in high-risk areas.

Kind of basic stuff. Something you should expect Horgan’s government, not a private donor, to fund it since it’s such a big threat. 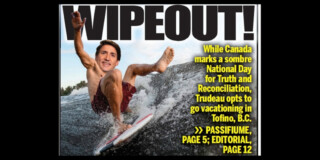 The Big One’s Overdue – So Remember Drop, Cover and Hold On!

No Tsunami (this time), but Islanders Deserve Way Better from EmergencyInfoBC